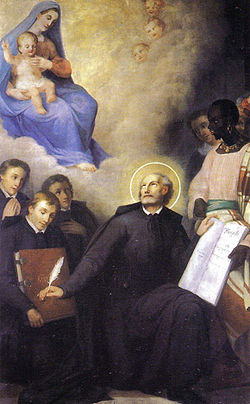 John Leonardi was born at Diecimo, Italy. He became a pharmacist's assistant at Lucca, studied for the priesthood, and was ordained in 1572. He gathered a group of laymen about him to work in hospitals and prisons, became interested in the reforms proposed by the Council of Trent, and proposed a new congregation of secular priests. Great opposition to his proposal developed, but in 1583, his association (formally designated Clerks Regular of the Mother of God in 1621) was recognized by the bishop of Lucca with the approval of Pope Gregory XIII. John was aided by St. Philip Neri and St. Joseph Calasanctius, and in 1595, the congregation was confirmed by Pope Clement VIII, who appointed John to reform the monks of Vallombrosa and Monte Vergine. He died in Rome on October 9th of plague contracted while he was ministering to the stricken. He was venerated for his miracles and religious fervor and is considered one of the founders of the College for the Propagation of the Faith. He was canonized in 1938 by Pope Pius XI. His feast day is October 9th.