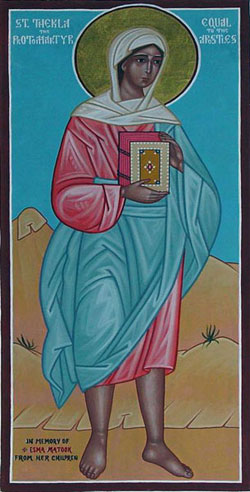 According to a popular second century tale, Acts of Paul and Thecla, she was a native of Iconomium who was so impressed by the preaching of St. Paul on virginity that she broke off her engagement to marry Thamyris to live a life of virginity. Paul was ordered to be scourged and banished from the city for his teaching, and Thecla was ordered burned to death. When a storm providentially extinguished the flames, she escaped with Paul and went with him to Antioch. There she was condemned to wild beasts in the arena when she violently resisted the attempt of Syriarch Alexander to kidnap her, but again escaped when the beasts did no harm to her. She rejoined Paul at Myra in Lycia, dressed as a boy, and was commissioned by him to preach the Gospel. She did for a time in Iconium and then became a recluse in a cave at Meriamlik near Seleucia. She lived as a hermitess there for the next seventy-two years and died there (or in Rome, where she was miraculously transported when she found that Paul had died and was later buried near his tomb). The tale had tremendous popularity in the early Church but is undoubtedly a pious fiction and was labeled apocryphal by St. Jerome. Her feast day is September 23.