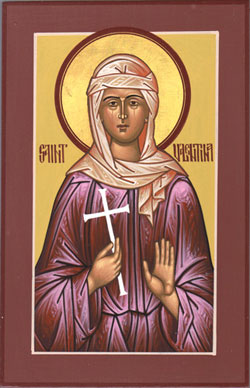 Thea was born at Gaza, Palestine. She was arrested with other Christians during the persecution of Christians under Emperor Maximian and brought before Firmilian, governor of Palestine, at Caesarea. When she denounced him for threatening to place her in a brothel, he had her scourged. When a Christian of Caesarea, Valentina, protested, Firmilian had her dragged to a pagan altar, and when she kicked over the fire and incense before the altar, he had her tortured. He then bound Thea and Valentina together and had them burned to death. Their feast day is July 25.