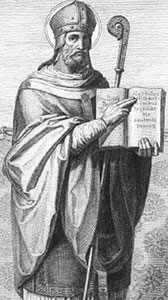 Sulpicius, also called Sulpice and Pius, was the son of wealthy parents, who renounced the idea of marriage and devoted himself even from his youth to all kinds of good works, and especially to care for the poor. When he became Bishop of Bourges in 624, he fought for the rights of his people against King Dagobert's minister, Lullo. Sulpicius attended the Council of Clichy in 627. He was known for his austerities and holiness, and is reported to have converted all the inhabitants of Bourges to Christianity with his holiness and charity. He resigned his Bishopric late in life to devote himself to the poor. The famous St. Sulpice Seminary in Paris is named after him. His feast day is January 17.