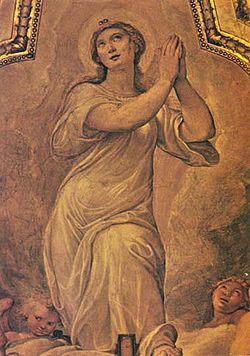 The beautiful daughter of Gabinius, a priest, and niece of Pope Caius, Susanna refused Emperor's Diocletian request that she marry his son-in-law, Maximian and converted two of her uncles, Claudius and Maximus who were court officers sent by Diocletian to persuade her to marry, to Christianity. Diocletian was so enraged by what she had done that he sent one of his favorites, Julian, to deal with the matter. Julian had Maximus, Claudius and his wife, Praepedigna, and their two sons, burned to death at Cumae, and then had Susanna and her father beheaded. There was a Susanna who lived in Rome, but the details of the story are fictitious. Her feast day is August 11th.