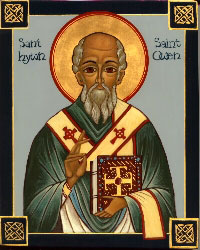 Ouen is also known as Owen and Audoenus. He was the son of St. Authaire and was born at Sancy near Soissons, France. He was educated at St. Medard Abbey, served at the courts of King Clotaire II and his son Dagobert I, who made him his chancellor and in 636 built a monastery at Rebais. He was pursuaded not to become a monk there by Dagobert, and despite the fact that Ouen was a layman, he was active in promoting religion and combating simony. He was continued as chancellor by King Clovis II, was ordained and in 641, was consecrated archbishop of Rouen. He encouraged learning and the founding of new monasteries, was known for his personal austerities and his charities, and supported missionary activities to pagan areas of his See. He supported Ebroin, mayor of the palace, against the nobles, and at the invitation of Thierry III, negotiated a peace between Neustria and Austrasia in Cologne. He died at Clich near Paris on August 24 while returning from Cologne. His feast day is August 24.