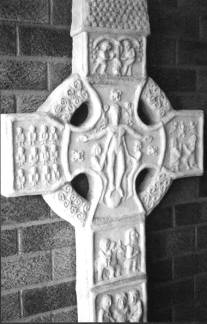 St. Kieran was born in Connacht, Ireland. He was the son of Beoit, a carpenter. He studied at St. Finnian's school at Clonard and taught the daughter of the king of Cuala, as he was considered the most learned monk at Clonard. Kieran spent seven years at Inishmore on Aran with St. Enda and then went to a monastery in the center of Ireland called Isel. Forced to leave by the monks because of what they considered his excessive charity, he spent some time on Inis Aingin (Hare Island) and with eight companions, migrated to a spot on the bank of the Shannon river in Offaly, where he built a monastery that became the famous Clonmacnois, reknowned for centuries as the great center of Irish learning, and was its Abbot. Many extravagant miracles and tales are told of Kieran, who is one of the twelve apostles of Ireland. He is often called St. Kieran the Younger to distinguish him from St. Kieran of Saighir. His feast day is September 9.