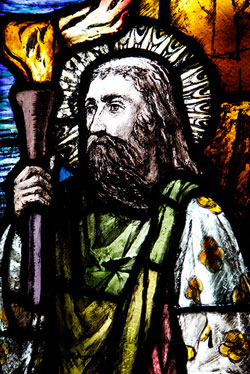 Legend has him an Irishman noted for his military feats who was convinced by his sister St. Fanchea to renounce his warring activities and marry. When he found his fiancee dead, he decided to become a monk and went on pilgrimage to Rome, where he was ordained. He returned to Ireland, built churches at Drogheda, and then secured from his brother-in-law King Oengus of Munster the island of Aran, where he built the monastery of Killeaney, from which ten other foundations on the island developed. With St. Finnian of Clonard, Enda is considered the founder on monasticism in Ireland. His feast day is March 21.