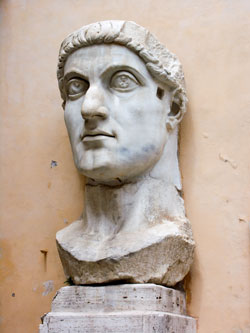 Junior Emperor and emperor called the "Thirteenth Apostle" in the East. The son of Constantius I Chlorus, junior emperor and St. Helena, Constantine was raised on the court of co-Emperor Diocletian. When his father died in 306, Constantine was declared junior emperor of York, England, by the local legions and earned a place as a ruler of the Empire by defeating of his main rivals at the battle of the Milvian Bridge in 312. According to legend, he adopted the insignia of Christ, the chi-rho, and placed it upon his labarum - the military standards that held the banners his armies carried into battle to vanquish their pagan enemies. His purple banners were inscribed with the Latin for "In this sign conquer." Constantine then shared rule of the Empire with Licinius Licinianus, exerting his considerable influence upon his colleague to secure the declaration of Christianity to be a free religion. When, however, Licinius and Constantine launched a persecution of the Christians, Constantine marched to the East and routed his opponent at the battle of Adrianople. Constantine was the most dominating figure of his lifetime, towering over his contemporaries, including Pope Sylvester I. He presided over the Council of Nicaea, gave extensive grants of land and property to the Church, founded the Christian city of Constantinople to serve as his new capital, and undertook a long-sighted program of Christianization for the whole of the Roman Empire. While he was baptized a Christian only on his deathbed, Constantine nevertheless was a genuinely important figure in Christian history and was revered as a saint, especially in the Eastern Church.