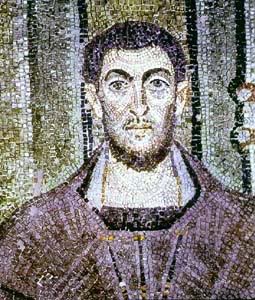 Early in the fifteenth century, there lived at Fabriano a boy of such extraordinary goodness that even his parents would sometimes wonder whether he were not rather an angel than a human child. Once, when his little sister was suffering from a disease which the doctors pronounced incurable, Constantius Bernocchi asked his father and mother to join him in prayer by her bedside that she might recover. They did so, and she was immediately cured. At the age of fifteen he was admitted to the Dominican convent of Santa Lucia and he seemed to have received the habit from the hands of Blessed Laurence of Ripafratta, at that time prior of this house of strict observance. Constantius was one of those concerned with the reform of San Marco in Florence, and it was while he was teaching in that city that it was discovered that he had the gift of prophecy or second sight. Among other examples, the death of St. Antoninus was made known to him at the moment it took place, and this is mentioned by Pope Clement VII in his Bull for the canonization of that saint. He was also credited with the power of working miracles, and besides the care of his office, he acted as peacemaker outside the convent and quelled popular tumults. He was esteemed so holy that it was reckoned a great favor to speak to him or even to touch his habit. Upon the news of his death, the senate and council assembled, "considering his death a public calamity", and resolved to defray the cost of a public funeral. The cultus of Blessed Constantius was confirmed in 1821. His feast day is February 25th.