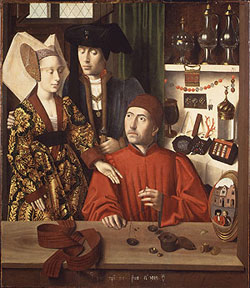 Eligius (also known as Eloi) was born around 590 near Limoges in France. He became an extremely skillful metalsmith and was appointed master of the mint under King Clotaire II of Paris. Eligius developed a close friendship with the King and his reputation as an outstanding metalsmith became widespread. With his fame came fortune. Eligius was very generous to the poor, ransomed many slaves, and built several churches and a monastery at Solignac. He also erected a major convent in Paris with property he received from Clotaire's son, King Dagobert I. In 629, Eligius was appointed Dagobert's first counselor. Later, on a mission for Dagobert, he persuaded the Breton King Judicael, to accept the authority of Dagobert. Eligius later fulfilled his desire to serve God as a priest, after being ordained in 640. Then he was made bishop of Noyon and Tournai. His apostolic zeal led him to preach in Flanders, especially Antwerp, Ghent, and Courtai where he made many converts. Eligius died on December 1, around 660, at Noyon. He is the patron of metalworkers and his feast day is December 1. The use of one's talents and wealth for the welfare of humanity is a very true reflection of the image of God. In the case of St. Eligius, he was so well liked that he attracted many to Christ. His example should encourage us to be generous in spirit and kind and happy in demeanor. 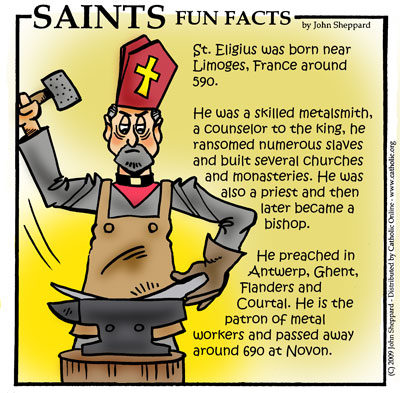