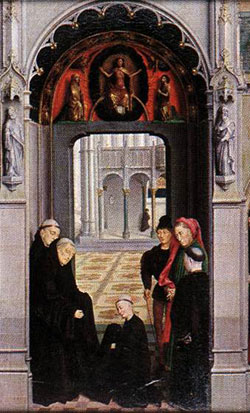 St. Bertin was born about the beginning of the 7th century near Constance, France, and received his religious formation at the abbey of Luxeuil, at that time, the model abbey for the rather strict Rule of St. Columban. About 639, together with two other monks, he joined St. Omer, Bishop of Therouanne, who had for two years been evangelizing the pagan Morini in the low-lying marshy country of the Pas-de-Calais. In this almost totally idolatrous region, these holy missionary monks founded a monastery which came to be called St. Mommolin after its first Abbot. After eight arduous years of preaching the Faith for Christ, they founded a second monastery at Sithiu, dedicated to St. Peter. St. Bertin ruled it for nearly sixty years and made it famous; accordingly, after his death it was called St. Bertin and gave birth to the town of St. Omer. St. Bertin practiced the greatest austerities and was in constant communion with God. He also traveled much and trained disciples who went forth to preach the Faith to others. Among others, he selected St. Winnoc to found a monastery at Wormhoudt, near Dunkirk, and this saint figures in many medieval calendars. At an advanced age (past 100), this zealous preacher of Christ died, surrounded by his sorrowing monks. 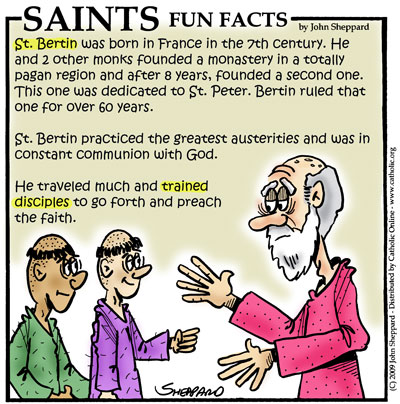