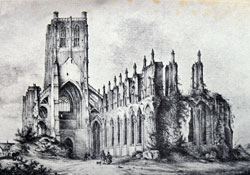 Benedictine abbot and founder, companion of Sts. Mommolinus and Bertrand. The three were born in Coutances, France, and became monks at Luxeuil. They were sent with St. Omer, the bishop of Therouanne, to evangelize the Morini people living in Pas-de-Calais. A monastery, now called St. Mommolin, was built there. Bertinus was named abbot of Sithin, later called St. Bertin's. He aided St. Omer in building a church near Sithin in 663. His liturgical emblem is a small ship.