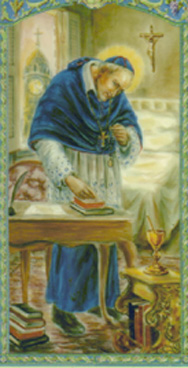 St. Alphonsus was born in the village of Marianella near Naples, Italy, September 27, 1696. At a tender age his pious mother inspired him with the deepest sentiments of piety. The education he received under the auspices of his father, aided by his own intellect, produced in him such results that at the early age of sixteen, he graduated in law. Shortly after, he was admitted to the Neopolitan bar. In 1723, he lost a case, and God made use of his disappointment to wean his heart from the world. In spite of all opposition he now entered the ecclesiastical state. In 1726, he was ordained a priest. He exercised the ministry at various places with great fruit, zealously laboring for his own sanctification. In 1732, God called him to found the Congregation of the Most Holy Redeemer, with the object of laboring for the salvation of the most abandoned souls. Amid untold difficulties and innumerable trials, St. Alphonsus succeeded in establishing his Congregation, which became his glory and crown, but also his cross. The holy founder labored incessantly at the work of the missions until, about 1756, he was appointed Bishop of St. Agatha, a diocese he governed until 1775, when broken by age and infirmity, he resigned this office to retire to his convent where he died. Few saints have labored as much, either by word or by writing, as St. Alphonsus. He was a prolific and popular author, the utility of whose works will never cease. His last years were characterized by intense suffering, which he bore with resignation, adding voluntary mortifications to his other pains. His happy death occurred at Nocera de Pagani, August 1, 1787.