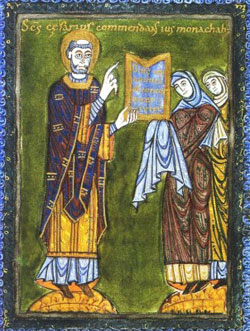 Archbishop and church man, the first in western Europe to receive the pallium from a pope. Caesarius was born in Chalons, Burgundy, France, in 470, of a French-Roman family. He spent a brief time as a monk in Lerins but was forced to depart from the community when he became ill. His uncle, the bishop of Arles, ordained Caesarius and sent him to reform a local monastery. He succeeded his uncle, Fonus, as bishop of ArIes in 503. Caesarius instituted many reforms, brought the Divine Office into the local parishes, and founded a convent, placing his sister St. Caesaria there as abbess, In 505, Caesarius was banished by the Gothic King Alaric II because of a lie. He was restored soon after. When Theodoric the Great, King of the Ostrogoths, besieged Arles, Caesarius was arrested, but he met with Theodoric and was pardoned. He then went to Rome where Pope St. Symmachus gave him the pallium and made him the apostolic delegate to France.When the Franks captured Arles in 536, Caesarius retired to St. John's Convent. He was revered for his more than forty years of service and for presiding over Church synods and councils, including the Council of Orange in 529. He died on August 27.