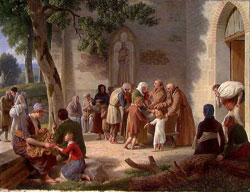 Missionary and bishop. Born at Hemeln, Lower Saxony, Germany, he studied in the cathedral school of Paderborn and possibly at Laon, France. He received an appointment as a canon at Bremen, Germany, where he became head of the local school. Ordained by St. Norbert at Magdeburg, he embarked upon a missionary life among the Wends in northern Germany, founding monasteries at Holstein, Segeberg, and Hogersdorf, Unfortunately, most of his work and missionary accomplishments were laid waste in 1147 by a terrible onslaught by marauding pirates. Escaping with some of his priests, he fled to safety in the Holy Roman Empire. In 1149, he was named bishop of Staargard, although he met resistance to his appointment by Emperor Frederick I Barbarossa who prevented him from occupying his see. He died at Neumunster, Lorraine, France, paralyzed the last three years of his life, and is honored as the Apostle of Holstein.