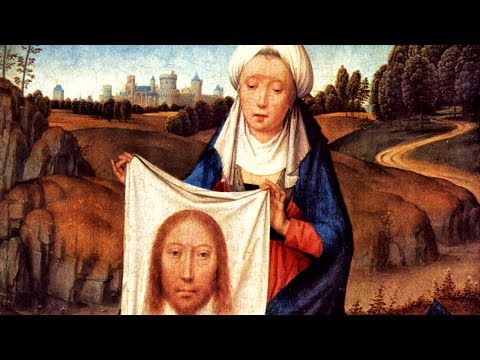 Saint Veronica is known as the woman who offered a cloth to Jesus so He could wipe His face on the way to His crucifixion. The cloth is believed to exist today in the Vatican and is considered one of the most treasured relics of the Church.

Saint Veronica is not mentioned in the Bible, but is known to us by Catholic tradition and in the Sixth Station of the Cross, "Veronica Wipes the Face of Jesus."

Legend states that as Christ was walking to Calvary, his face dripping with sweat and blood, Saint Veronica, a bystander, was moved with compassion. She approached Jesus and offered Him a cloth, likely her veil, which He accepted and used to wipe His face.

The image of his face was subsequently imprinted on the cloth.

There are no legends from the period which speak of Veronica either before or after her act of compassion. We do not know when she was born or when she died. She is literally lost to history. However, the cloth may still exist today, kept safe at St. Peter's in Rome.

This particular cloth bearing the likeness of Christ's face, although ancient and difficult to distinguish, is considered one of the most treasured relics in the Vatican. According to legend, it is the original relic, although throughout the ages many copies were created and some were passed along as genuine.

Most of what we know about the veil was recorded in the medieval period, although it was first mentioned as being in the hands of Pope John VII in the early eighth century. The veil and the legend surrounding it became very popular in the thirteenth though fifteenth centuries when the veil was on public display. Indulgences were granted for people who performed devotions before it.

The fate of the veil was obscured by violence in 1527 by the Sack of Rome in which it may have been destroyed. Many reproductions were created at this time, and it is unfortunately unclear if the veil still kept by the Vatican is the original or a reproduction.

In 1616, Pope Paul V banned the production of all copies of the veil, which has become popular. In 1629, Pope Urban VIII went a step further and ordered the destruction of all copies, or that existing copies should be delivered to the Vatican. Anyone who disobeyed this order was to be excommunicated.

The Veil of Veronica has since been kept from the public and rarely has been seen since. There are six known copies in the world, and there is one kept in St. Peter's basilica which is allegedly the same one from the Medieval period. If true, then it is possible this is the original relic. None of these relics have been photographed in detail or have been subjected to forensic testing.

The relic is kept in a frame, cut to match the outline of the original image on the cloth.

The Vatican's relic is displayed, although briefly, on the 5th Sunday of Lent each year. According to those who have seen the relic up close, there is minimal detail.

As for Saint Veronica, she is honored with a feast on July 12. Her icons show a woman holding a cloth upon which the face of Christ is imprinted. She is the patron of laundry workers and photographers.

The woman of Jerusalem who wiped the face of Christ with a veil while he was on the way to Calvary. According to tradition, the cloth was imprinted with the image of Christ's face." Unfortunately, there is no historical evidence or scriptural reference to this event, but the legend of Veronica became one of the most popular in Christian lore and the veil one of the beloved relics in the Church. According to legend, Veronica bore the relic away from the Holy Land, and used it to cure Emperor Tiberius of some illness. The veil was subsequently seen in Rome in the eighth century, and was translated to St. Peter's in 1297 by command of Pope Boniface VIII. Nothing is known about Veronica, although the apocryphal Acts of Pilate identify her with the woman mentioned in the Gospel of Matthew who suffered from an issue of blood. Her name is probably derived from Veronica , as was reported by Giraldus Cambrensis. The term was thus a convenient appellation to denote the genuine relic of Veronica's veil and so differentiate from the other similar relics, such as those kept in Milan. The relic is still preserved in St. Peter's, and the memory of Veronica's act of charity is commemorated in the Stations of the Cross. While she is not included in the Roman Martyrology, she is honored with a feast day. Her symbol is the veil bearing the face of Christ and the Crown of Thorns.