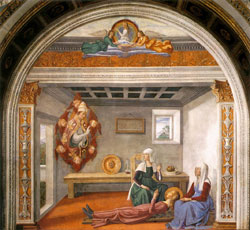 St. Fina or Seraphina, Virgin A.D. 1253 The old town of San Geminiano in Tuscany treasures with special veneration the memory of Santa Fina, a young girl whose claim to be recognized as a saint lay in the perfect resignation with which she accepted bodily suffering. She was born of parents who had seen better days but had fallen into poverty. The child was pretty and attractive. Poor as she was she always kept half her food to give to those who were worse off than herself. As far as possible she lived the life of a recluse at home, sewing indeed and spinning during the day, ;but spending much of the night in prayer. Her father seems to have died when she was still young and about the same time Fina was attacked by a sudden complication of diseases. Her head, hands, eyes, feet and internal organs were affected and paralysis supervened. She lost her good looks and became a miserable object. Desiring to be like our Lord on the cross, for six years she lay on a plank in one position, unable to turn or to move. Her mother had to leave her for hours while she went to work or beg, but Fina never complained. Although in terrible pain she always maintained serenity and with her eyes fixed upon the crucifix she kept on repeating,"It is not my wounds but thine, O Christ, that hurt me".

Fresh trouble befell her. Her mother died suddenly and Fina was left utterly destitute. Except for one devoted friend Beldia she was now so neglected that it was clear she could not live long, dependent on the casual attentions of poor neighbors who shrank from contact with her loathsome sores. Someone had told her about St. Gregory the Great and his sufferings, and she had conceived a special veneration for him. She used to pray that he, who was so much tried by disease would intercede with God that she might have patience in her affliction. Eight days before her death as she lay alone and untended, Gregory appeared to her and said, "Dear child on my festival God will give you rest". And it came to pass when her body was removed from the board on which it had rested, the rotten wood was found to be covered with white violets. All the city attended the funeral and many miracles were reported as having been wrought through her intercession. In particular she is said as she lay dead, to have raised her hand and to have clasped and healed the injured arm of her friend Beldia. The peasants of San Geminiano still give the name of Santa Fina's flowers to the white violets which bloom about the season of her feast day of March 12th. 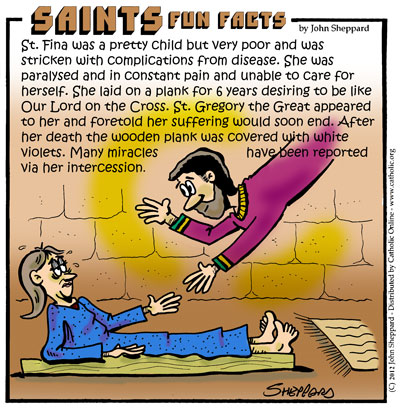