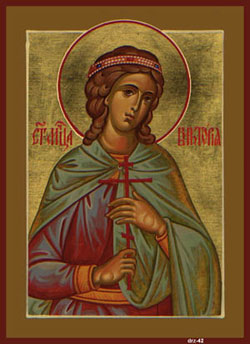 There is very little known about St. Victoria. With her sister Anatolia, she refused importunate suitors. Both were imprisoned and starved by their suitors but persisted in refusing marriage. Anatolia was converted to Christianity and converted many in Picenum before being denounced for her faith, for which she was tortured and executed at Thora on Lake Velino in Italy. When Victoria refused to sacrifice to pagan gods, she too was executed, perhaps at Tribulano. The guard was converted by their example and was also martyred. Their whole story is probably a pious myth, though they did actually live. Feast day is December 23rd.