Feastday: May 14
Patron: of Feltre; Castelfidardo; Corona is invoked in connection with superstitions involving money, such as gambling or treasure hunting
Death: 176 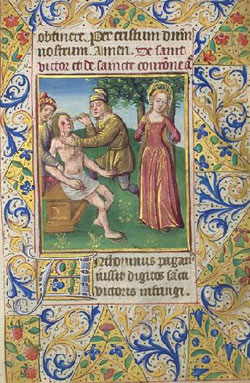 Little is known about the two Christian martyrs, St. Victor and St. Corona. Most sources believe they were killed near each other in Roman Syria during the reign of Marcus Aurelius in 170 A.D. and that a Roman judge named Sebastian ordered for their deaths.

Victor was believed to be a Roman soldier. After his Christianity was discovered, other soldiers brought Victor to face judgement before Sebastian. Sebastian was known for being a tough man who despised Christians.

Sebastian, wanting to make an example out of Victor, ordered to be bound to a pillar and whipped until his skin fell from his body. After the whipping, Sebastian ordered Victor's eyes to be gouged out.

No matter the amount of pain Victor endured, he never denied the Lord.

News about Victor's cruel treatment reached a young girl named Corona. Corona is believed to have been the wife of one of the soldiers, and a Christian herself, though she kept her faith a secret.

Hearing about Victor, Corona decided she needed to do something to help the dying man. She publicly announced her own Christianity and rushed to Victor's side. She knelt next to him and prayed, letting him know he was not alone.

Not much time passed before Corona was brought before Sebastian, too, to face her own punishment.

Sebastian could not believe Corona's actions. He immediately ordered her to be imprisoned and tortured. Corona was tied to the tops of two palm trees bent down to the ground.

At Sebastian's command, the ropes holding the trees down were cut and the trees sprang away from each other and back to their upright position. The force was so strong that Corona's body was ripped in half.

As a final command, Sebastian ordered Victor to be beheaded.

The stories surrounding St. Victor and Corona vary with some even considering the two martyrs were actually husband and wife killed alongside each other for their faith.

Remains, believed to be of St. Victor and Corona's, have been in a basilica in the city of Anzů, Italy since the 9th century.

St. Corona is the patron saint of treasure hunters, and St. Victor and Corona's feast day is celebrated on May 14.