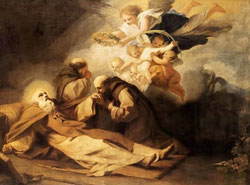 Anthony was born about circa 468 at Valeria in Lower Pannonia. When he was eight years old, his father died and he was first entrusted to the care of St. Severinus. After the death of Severinus, an uncle, Bishop Constantius of Lorsch in Bavaria took charge of his upbringing. While in Bavaria, Anthony became a monk. He returned to Italy in 488 and joined the cleric Marius and his companions as a hermit at Lake Como. However, he gained so many disciples that he was forced to flee. Anthony then went to Lerins in Gaul and became a monk there. However, he lived only two years at Lerins before his death, renowned for his miracles and spirituality.