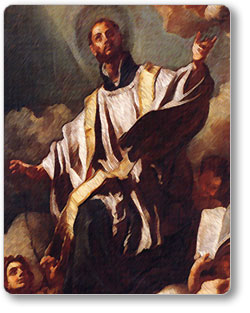 In 1523, the Church was in sad shape. People could not get the spiritual nourishment they needed from the large numbers of uneducated and even immoral priests who took their money but returned nothing. When good priests and laypeople turned to the hierarchy for help, they found leaders at best apathetic and indifferent to their concerns.

How should a good Catholic respond to this situation? We all known how Luther and others responded -- by splitting away from the Catholic Church when their pleas went unheard.

Cajetan took a different route. Just as concerned as Luther was about what he observed in the Church, he went to Rome in 1523 -- not to talk to the pope or the hierarchy but to consult with members of a confraternity called the Oratory of the Divine Love. When he had first come to Rome many years before, he had felt called to some unknown great work there. A few years later he returned to his hometown of Vicenza -- his great work seemingly unrealized. He had however studied for the priesthood and been ordained and helped re-establish a faded confraternity whose aims were promoting God's glory and the welfare of souls.

In the years he had been gone from Rome, he had founded another Oratory in his home town and Verona where he had promoted spiritual life and care for the poor and sick not only with words but with his heroic example. He told his brothers, "In this oratory we try to serve God by worship; in our hospital we may say that we actually find him." But none of the horrors he saw in the hospitals of the incurables depressed him as much as the wickedness he saw everywhere he looked.

In his former confraternity, he found other clergy who felt the way he did. They didn't want to split off from the Church, they wanted to restore it. So they decided to form an order based on the lives of the apostles in the hopes that these lives would inspire them and others to live holy lives devoted to Jesus. In order to accomplish this they would focus on moral lives, sacred studies, preaching and pastoral care, helping the sick, and other solid foundations of pastoral life. This new order was known as Theatines Clerks Regular because it was an order of the regular clergy and because a bishop known as Theatensis was their first superior general (although Cajetan is considered the founder).

Not surprisingly, they didn't find thousands of formerly greedy and licentious priests flocking to their door. But Cajetan and the others persevered even in the face of open opposition from laity and clergy who didn't want to reform. It was his holy example that converted many as well as his preaching.

Worn out by the troubles he saw in his Church and his home, Cajetan fell ill. When doctors tried to get him to rest on a softer bed then the boards he slept on, Cajetan answered, "My savior died on a cross. Let me died on wood at least." He died on August 7, 1547.

Do you have concerns about the Church or about certain people in power in the Church? Have you ever thought of leaving the Church because of these concerns? What positive steps could you take instead of splitting from the Church to help promote holiness and love of God and others?

Saint Cajetan, when we see things that trouble us in our Church, help us to continue to love her. Guide us to the positive steps we need to take to work within the Church for renewal. Help us to be examples of holiness to all. Amen