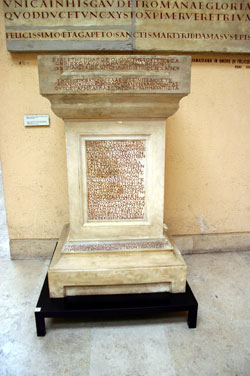 Bishop and apologist whose hagiography dates to the second century. The bishop of Hieropolis in Phrygia, he made a visit to Rome at the age of seventy-two. In Rome, Abercius was supposedly commanded by Emperor Marcus Aurelius to rid his daughter, Lucilla, of a demon. Following this event, Abercius is recorded as visiting Syria and the Euphrates River. The details of Abercius' life led to debate through the centuries concerning their authenticity and veracity. It is known that Abercius was the bishop of Heiropolis in the area called Phrygia Salutaris. In the original "Inscriptions of Abercius," an epitaph on a stele now in the Vatican, the saintly bishop comments on the dazzling seal of Baptism that unites Christians everywhere. He speaks of the Holy Eucharist as well. Later interpretations of this "Inscription" were written in Greek and widely embellished, leading to debate. Abercius appears in Greek records in the tenth century but was not included in St. Jerome's martyrology.
Continue reading about St. Abercius Marcellus