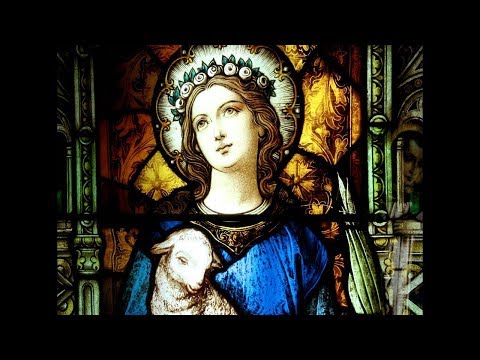 St. Agnes of Rome was born in 291 AD and raised in a Christian family. Agnes was very beautiful and belonged to a wealthy family. Her hand in marriage was highly sought after, and she had many high ranking men chasing after her. However, Agnes made a promise to God never to stain her purity. Her love for the Lord was great and she hated sin even more than death!

Whenever a man wished to marry Agnes, she would always say, "Jesus Christ is my only Spouse."

According to legend, the young men she turned away became so angry and insulted by her devotion to God and purity that they began to submit her name to authorities as a Christian follower.

In one incident, Procop, the Governor's son, became very angry when she refused him. He tried to win her for his wife with rich gifts and promises, but the beautiful young girl kept saying, "I am already promised to the Lord of the Universe. He is more splendid than the sun and the stars, and He has said He will never leave me!"

In great anger, Procop accused her of being a Christian and brought her to his father, the Governor. The Governor promised Agnes wonderful gifts if she would only deny God, but Agnes refused. He tried to change her mind by putting her in chains, but her lovely face shone with joy.

Next he sent her to a place of sin, but an Angel protected her. At last, she was condemned to death. Even the pagans cried to see such a young and beautiful girl going to death. Yet, Agnes was as happy as a bride on her wedding day. She did not pay attention to those who begged her to save herself. "I would offend my Spouse," she said, "if I were to try to please you. He chose me first and He shall have me!" Then she prayed and bowed her head for the death-stroke of the sword.

Other accounts of Agnes' life hold the Prefect Sempronius responsible for her martyrdom. It is said he condemned the young girl to be dragged through the streets naked. Some versions of the legend state that Agnes' hair grew instantly to cover her entire body and all the men who attempted to rape the beautiful virgin were immediately struck blind.

The stories go on to explain that another man presided over Agnes' trial after Sempronius excused himself. The new man sentenced Agnes to death. At first, Agnes was tied to a stake, but either the wood would not burn or the flames parted away from her. This prompted an officer to draw his sword and behead the girl. It is believed that her blood, which poured out to the stadium, was soaked up with cloths by Christians.

In 1858, Father Caspar Rehrl, an Austrian missionary founded the Congregation of Sisters of St. Agnes.

Her feast day is celebrated on January 21. On her feast day, it is customary for two lambs to be brought in to be blessed by the pope. On Holy Thursday the lambs' wool is removed and woven into the pallium the pope gives to a newly consecrated archbishop as a sign of his power and union with the pope.