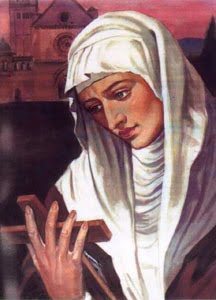 Agnes was born in Assisi. She was the younger sister of St. Clare. At fifteen she joined Clare at the Benedictine convent of Sant'Angelo di Panzo. Determined to follow her sister's life of poverty and penance, she resisted her relatives' attempts to force her to return home, and was given the habit by St. Francis and sent to San Damiano with Clare, thus founding the Poor Clares. St. Francis appointed her abbess of the Poor Clares' convent at Monticelli near Florence in 1219. She established convents at Mantua, Venice, and Padua, and supported her sister's struggle for poverty in their Order. Agnes was with Clare at her death and died three months later, on November 16, reportedly as predicted by Clare. Many miracles have been reported at her tomb in Santa Chiara Church in Assisi. November