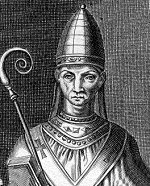 Born in Romagna, John of Tossignano was bishop of Bologna and archbishop of Ravenna before his election to the see of Rome in 914. Elected through the influence of the House of Theophylactus, John alienated Marozia, matron of the house and a senator of Rome, when he allied himself with King Hugh of Italy ten years after his election. John rebuilt the Lateran and battled the Saracens. He also approved the rule of Cluny. In 928, Marozia had him deposed and imprisoned. He is thought to have been smothered while in prison.