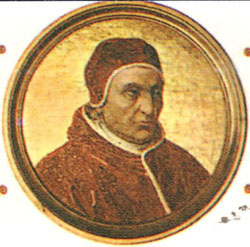 Innocent VII The choice of Cardinal Cosmino de Migharatias as pope in 1404 was not a popular one. The Romans rioted, and Ladislaw of Naples quelled their unrest. Antipope Benedict XIII at Avignon also opposed the election of Innocent VII. A canon lawyer and cardinal from Bologna, Innocent agreed to end the schism between the pope in Rome and the antipope in Avignon, but he refused Benedict safe passage when he arrived to negotiate in 1405. That year, Innocent contended again with rioting Romans, who protested the misbehavior of his nephew, Ludovico. Innocent fled to Viterbo to escape the strife. While he was away, Ladislaw returned and conquered Rome. The Romans then invited Innocent VII to come back to Rome the following year. By excommunicating Ladislaw, Innocent re-established himself as the ruler of Rome. Before his death that year, Innocent began a reorganization of the University of Rome.