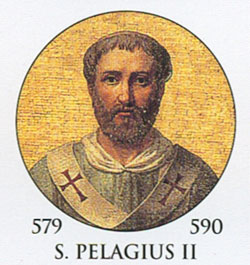 The son of a Goth, Pelagius was born in Rome, and little is known of his early life. He was elected pope in 579 during a Lombard seige and was ordained immediately. An appeal to the emperor brought the advice to bribe the invaders and seek aid from the Franks. The Franks failed to respond, and in 585, the exarch Smaragdus arranged an armistice with the Lombards, during which time the pope began to discuss the Three Chapters with schismatic bishops in Italy. Four years later, the Third Council of Toledo proclaimed the conversion of the Goths in Spain. Pelagius turned his house into a hospital and was among the first victims of a plague that followed the Tiber's flooding in 590.