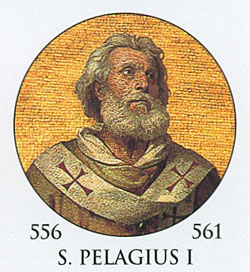 As a deacon, Pelagius translated The Sayings of the Elders, a V Century Greek work into Latin. In 536, he travelled with Pope Agapetus I to Constantinople, where he represented the see of Rome at a synod against the monophysites. Ten years later, Pelagius served as vicar for the pope during a Gothic seige of Rome; when Rome fell to Totila, Pelagius interceded on behalf of its citizens. Totila was so impressed that he sent Pelagius to represent him during peace negotiations with officials at Constantinople. The mission was unsuccessful. Pelagius supported Pope Vigilius's opposition to the emperor's condemnation of the authors of the Three Chapters and shared his exile. When Vigilius relented and condemned the Three Chapters with the men who wrote them, he also excommunicated Pelagius, who was Justinian's candidate to succeed Vigilius. Elected to the papacy in 555, Pelagius was not enthroned for a year because no one would consecrate him. During his five-year papacy, he reorganized papal properties and worked to attract more men to the priesthood. He sought also to reform monastic life. Because church law forbids the pope to use force, Pelagius asked the exarch of Ravenna to repress schismatics.

Continue reading about Pelagius I