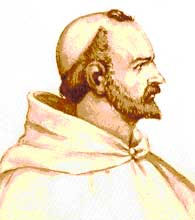 The pope whose 1184 council laid the foundation for the Inquisition, Lucius III was born Ubaldo Allucingoli c. 1097 or c. 1110 at Lucca. He became a Cistercian under Bernard of Clarivaux, and Innocent II appointed Ubaldo cardinal deacon in 1141. Ubaldo became cardinal bishop of Ostia in 1159 under Adrian IV. Elected pope two years later, he was crowned at Velletri because he displeased the Roman populace. After the council of Verona in 1184, the pope issued a bull, Ad abolendum, that unrepentant heretics, whom the church had excommunicated, should be turned over to civil authorities. In this matter, the pope and Emperor Frederick I Barbarossa were of one mind. Lucius refused to crown Henry VI, Frederick's son, emperor while Frederick lived. Lucius opposed the Cathari, whose beliefs were similar to those of the Manichees. Unpopular in Rome, Lucius lived in Velletri or Agnani during most of his papacy, which ended with his death in 1185.