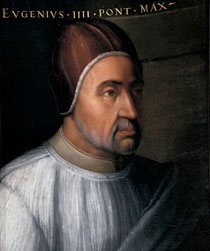 Eugene IV Gabriele Condulmaro was born c. 1383 near Venice and was elected to the papacy as Eugene IV in 1431. A relative of Gregory XII, who made him a cardinal in 1408, Gabriele participated in the Council of Constance (1414-1418) which deposed Gregory. Eugene became an emeny of the Colonna family when he took property given to them by Martin V. Eugene fled Rome in 1434. He returned nine years later. A war in the Balkans against the Turks ended in that year with the defeat of the Christians at Varna. Eugene died in 1447.