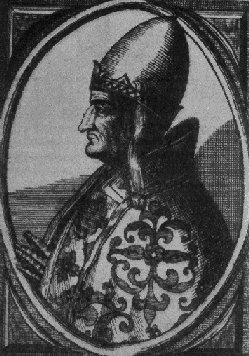 Pope Anastasius IV was born Corrado di Subarra and had a long career in the church before his election to the papacy in 1253. Pope Paschal II appointed him cardinal priest of Sta. Pudenzia c. 1111-1114, and in 1126, Honorius III made Corrado cardinal bishop of Sabina. As Honorius' representative, he settled disputes at Farsa and at Monte Cassino, and from 1130-1137, he was vicar for Innocent III. Corrado served as Eugene III's vicar from 1147-1149 and again from 1150-1152. As pope, Anastasius sent Nicholas Breakspear (later Pope Adrian IV) to Scandinavia to organize the church and maintained peaceful relations with the commune that controlled Rome. Anastasius died in 1154.