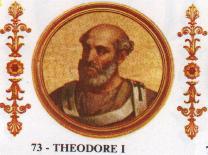 A Greek born in Jerusalem, Theodore I may have come to Rome to escape the Arab invasions of the Holy Land. The son of a bishop, he was elected to the papacy in 642. He opposed monothelitism and received the repentance of Patriarch Pyrrhus of Constantinople, whom St. Maximos the Confessor had humiliated in public debate. (Not restored to the patriarchate, Pyrrhus returned to his heretical views). Theodore called a council at the Lateran before his death in 649 to condemn the Ecthesis of Emperor Heraclius, an expression of monothelitism, and the Typos of Emperor Constans II, which forbade the discussion of will and operation in Christ.

Continue reading about Theodore I