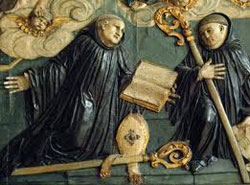 Benedict of Aniane Responsible for a revival of Frankish monasticism in VIII/IX Centuries, St. Benedict of Aniane (d. 821) was the scion of a noble Visigoth family and served as cupbearer to Pepin III and Charlemagne before becoming a monk c. 770/773 at St.-Seine near Dijon. Benedict became a hermit on his family estate and lived on the banks of the Aniane, where several other solitaries joined him. Benedict compiled all known monastic rules in Codex regularum and composed Concordia regularum to demonstrate the universality of the Rule of St. Benedict of Nursia, his namesake. Benedict of Aniane may have compiled also the supplement to the Gregorian sacramentary usually attributed to Alcuin of York. At the request of King Louis I the Pious, Benedict convoked and led the synod of Aachen in 817, which determined that all monasteries in Louis' kingdom should follow the Rule of St. Benedict of Nursia. Implementation of this decree was not totally successful.