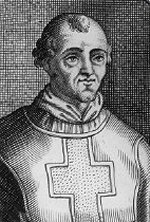 Benedict VI Roman by birth, Benedict was elected pope in 972 and was crowned with the approval of Otto I the following year. Benedict forbade the sale of clerical offices. In early 974, the consul Crescentius I led a rebellion in Rome and imprisoned the pope in the Castel Sant'Angelo, where he was strangled in July of that year.