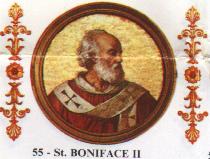 Boniface II A Roman of Germanic descent, Pope Boniface II gained infamy for his suggestion that a pope appoint his own successor. The favorite of Felix III/IV, he was not elected to the papacy immediately after Felix's death in 530. When Dioscorus died twenty-two days after his election, Boniface was voted into the papal office. In 531, Boniface called a council to confirm the pope's right to choose his own successor and to confirm Vigilius as his successor. A second council later that year overruled the previous council's decisions. When Boniface died in 532, he was buried in St. Peter's; John II succeeded him.