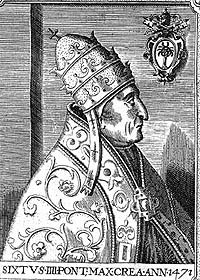 Born in 1414 near Savona, Francesco della Rovere was a Franciscan who taught at several universities and wrote treatises on the issues that divided his order from the Dominicans, until he was elected pope in 1471. He became Pope Sixtus and was the fourth of that name. He longed to crusade, but his calls for action did not receive the necessary support. The papal fleet did, however, participate in a landing that resulted in the capture of Smyrna in 1472. A patron of Botticelli, Sixtus was also responsible for the rebuilding of several Roman churches and the construction of the Sistine Chapel. He also founded the Sistine Choir and opened the Vatican library to scholars. He approved the feast of the Immaculate Conception of the Virgin Mary in 1476 and canonized St. Bonaventure in 1482. Although Sixtus appointed Thomas de Torquemata to the Spanish Inquisition, the pope condemned the inquistion's abuses. In 1483, Sixtus banned appeals of papal censure to general councils. Sixtus died the following year.