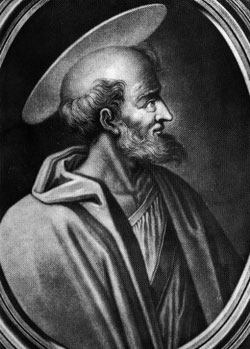 The first pope depicted with a square nimbus in a contemporary mosaic, St. Simplicius was born in Tivoli and was elected to the papacy in 468. In 476, the last emperor of the Western Empire was deposed, and Odoacer the Goth became the first king of Italy and a Roman patrician. Simplicius opposed monothelitism and built churches. He wanted to maintain papal authority in the Western Empire in spite of the collapse of civil authority. Simplicius died, after a long illness, in 483.