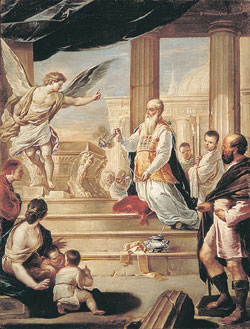 Born in Calabria, St. Zachary was a deacon to Gregory III before he succeeded him as pope in 741. The last pope to announce his election to the patriarch of Constantinople, Zachary strongly opposed the iconoclasm of Emperor Constantine V Copronymous. Zachary also opposed the slave trade. He negotiated peace in Italy and supported the establishment of the Carolingian line in France. Zachary supported Boniface's mission in Germany and is said to have had maps of the Christian world painted on the walls of a tower in the Lateran. He translated the dialogues of Gregory the Great from Latin into Greek. Zachary died in 752.