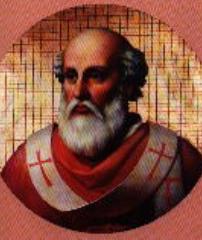 Adeodatus was a monk at St. Erasmo on the Caelian Hill before his election to the papacy in 672. As pope, he rebuilt buildings at the monastery and restored the basilica of St. Peter's on the Via Portuguese. Patriarch Constantine I of Constantinople removed the pope's name from the diptychs since Adeodatus was not a monothelite and the patriarch was. Adeodatus was the first pope to date events in terms of his reign, and he died in the fourth year of his reign, or in 676.