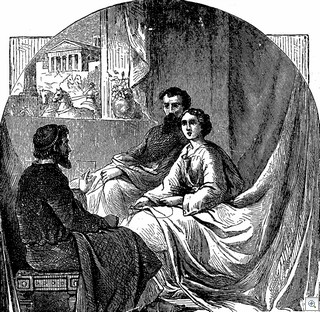 Aquila was a Jewish tentmaker. He and his wife Prisca or Priscilla were forced to leave Rome when Emperor Claudius forbade Jews to live there. They went to Corinth, where St. Paul lived with them during his stay there and may have converted them to Christianity. They accompanied Paul to Ephesus and remained there; Paul stayed with them on his third missionary journey. They then returned to Rome, where there house was also used as a church and then went back to Ephesus. They suffered martyrdom in Asia Minor, according to the Roman Martyrology but a tradition has them martyred in Rome. Their feast day is July 8th.