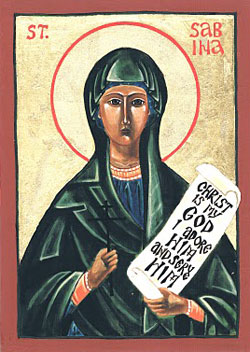 St. Sabina's feast day is August 29th. We know St. Sabina only through legend, and there is some question as to it's trustworthiness. Even the century in which she lived is unknown. Supposedly Sabina was converted to Christianity by her Syrian servant Serapia. During the persecution of Emperor Hadrian, Serapia suffered martyrdom for her Christian Faith. It is believed that St. Sabina was murdered for the Faith about a month later. The reknowned basilica on the Aventine in Rome is dedicated to and named after her. Some sources hold that Sabina herself had it constructed in the third or fourth century. In an age when our Faith is ridiculed as being outmoded, we take heart in the lives of so many martyrs, like St. Sabina, who gave their lives under terrible conditions to defend and sustain their Faith. This confers on us a strong desire to persevere in God's love.