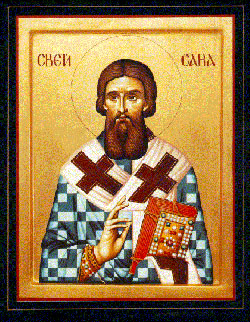 Sava was the son of Stephen I, founder of the Nemanydes dynasty, and also known as Sabas. He became a monk on Mount Athos in Greece when he was seventeen. With his father, who abdicated in 1196, he founded Khilandrai Monastery on Mount Athos for Serbian monks and became Abbot. He returned home in 1207 when his brothers, Stephen II and Vulkan, began to quarrel, and civil war broke out. Sava brought many of his monks with him, and from the headquarters he established at Studenitsa Monastery, he founded several monasteries and began the reformation and education of the country, where religion and education had fallen to a low estate. He was named metropolitan of a new Serbian hierarchy by Emperor Theodore II Laskaris at Nicaea; was consecrated, though for political reasons unwillingly, by Patriarch Manuel I in 1219; returned home bringing more monks from Mount Athos; and in 1222 crowned his brother Stephen II King of Serbia. Through his efforts, he finished the uniting of his people that had been begun by his father, translated religious works into Serbian, and gave his people a native clergy and hierarchy. He made a pilgrimage to the Holy Land, was later sent on a second visit there on an ecclesiastical mission, and died on the way back at Tirnovo, Bulgaria, on January 14. He is the patron of Serbia. His feast day is January 14th.