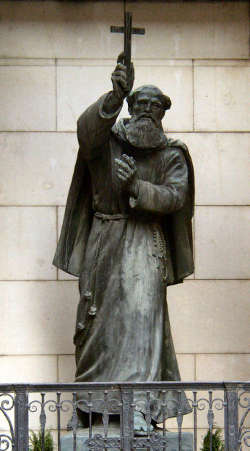 Marco d'Aviano (1631-1699) was a Capuchin friar. His real name was Carlo Domenico Cristofori, his birthplace Aviano, a small community in the Republic of Venice (Italy). From an early age, he felt attracted to a life of devotion and martyrdom. Educated at the Jesuit College in Gorizia, at 16 he tried to reach the island of Crete, where the Venetians were at war with the Ottoman Turks, in order to preach the Gospel and convert the Muslims to Christianity. On his way, he sought asylum at a Capuchin convent in Capodistria, where he was welcomed by the Superior, who knew his family, and who, after providing him with food and rest, advised him to return home.