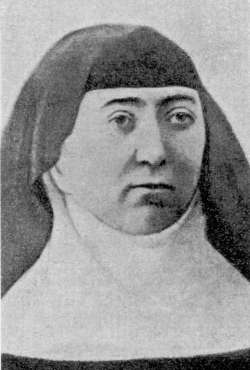 Maria Josefa Sancho de Guerra (Maria Josefa of the Heart of Jesus, September 7, 1842 - March 20, 1912) was a Spanish nun, founder of the Institute of the Servants of Jesus charity and declared a saint by the Catholic Church in 2000.

Born in 1842 in the city of Vitoria (Basque Country, Spain). With 7 years bereft of father and lived for some years in the home of relatives in Madrid. At 18 he felt a religious vocation and finally became a nun at the Institute of the Servants of Mary, taking the religious name of Maria Josefa of the Heart of Mary.

Founded in Bilbao in 1871, along with other colleagues who had left the Institute of the Servants of Mary, the Institute of the Servants of Jesus, which would be higher during the 41 years. This new institution was intended to aid the sick in hospitals and in their homes, the elderly, children and the homeless. The institution has grown since its first open house in Bilbao in 1871, so that when Maria Josefa died in 1912 were 43 houses and a thousand founded the Sisters of the institution. Today is extended to 16 countries and has nearly 100 homes.