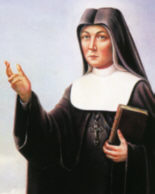 Maria Karlowska (1865-1935)was a Polish nun, founder of the Sisters of the Divine Shepherd.

She had ten older siblings. An inhabitant of Pozna? in 1882 made ??a vow of chastity. After the course has been cutting and sewing instructor in embroidery and sewing workshop, also took the charity. Her social work among the poor, the sick and broken families Poznan resulted in the foundation of educational establishments - hospitals and rehabilitation for patients with venereal diseases, for girls and women, "the street" called Houses of the Good Shepherd.

In 1894, she founded the Congregation of the Sisters of the Divine Shepherd, and has developed its Constitution, and the ascetic books, educational and practical, containing an exhaustive indication of the sisters use to this day. In 1902, religious vows, adding a fourth - the vow of consecration to the work of people lost morally.

Winiary worked in the village (now a district of Poznan), in Victorines near Lublin, Toru?, ?ód?, in Pniewitem and Topolnie, Jablonow Pomeranian creating biscuits factory, model farm and agricultural school. She founded nine centers in the care and assistance were women from the margins of society. The Polish authorities have distinguished themselves in 1928, her Golden Cross of Merit for community service and good przymna?anie Church and Motherland.

She died in holiness, and in the "Courier from Warsaw" was written about her, that "(...) a star on the horizon was a Polish charity. One of these, which tend to be lit by hand of the Almighty so that people do not believe in the survival of the dark and had the courage to live until morning "