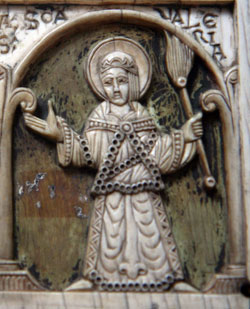 Valerie is a derivative of Valeria. St. Valeria was an early martyr probably at or near Milan. According to legend, Vitalis was a soldier who, when the physician St. Ursicinus of Ravenna wavered when faced with death for Christ, encouraged him to stand firm. The governor accordingly ordered Vitalis to be racked and then buried alive, which was done. His wife, St. Valeria, was set upon by pagans near Milan and died from their brutal treatment. These things are said to have happened during the persecution under Nero, but the second century, under Marcus Aurelius, is a more likely date for their martyrdom. Their feast day is April 28th.