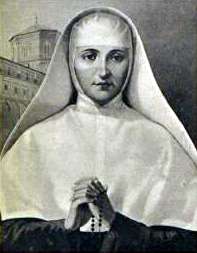 Olivia Pietrantoni was born and baptized March 27th, 1864 Pozzaglia Sabina, Italy to Francesco Pietrantoni and Caterina Costantini, farmers. She was the second of eleven children.

Olivia, later known as "Livia", was confirmed at age four and received first Holy Communion c. 1876. From an early age she worked in fields and tended animals. At age seven she began to work with other children who were moving sacks of stone and sand for construction of a road from Orvinio to Poggio Moiano. When she was twelve, she left for the winter months with other youngsters to work in the winter olive harvest in Tivoli.

She refused offers of marriage and, believing she had a vocation to religious life, traveled to Rome with her uncle. Some had suggested that she sought religious life to escape hard work. To them she is said to have replied, "I wish to choose a Congregation in which there is work both day and night." But in Rome, she was turned away.

A few months later, the Mother General of the Sisters of Charity of Saint Jeanne-Antide Thouret communicated that Livia was expected at the Generalate. She arrived in Rome, aged 22, on March 23, 1886. After postulancy and the novitiate, she received the name "Saint Agostina" and at that time had a premonition that she would indeed become a saint by that name.

Sister Agostina was sent to Holy Spirit Hospital, which had served the sick for seven hundred years. The hospital was not, in fact, hospitable to religious. The Capuchins had been forced to leave, crucifixes and other religous articles were removed and banned, and the sisters were forbidden to speak of God. While working in the tuberculosis ward, Sister contracted the disease, but was miraculously healed.

In the course of her work, Sister Agostina found a private corner of the hospital in which to pray the patients, including Joseph Romanelli, an adult male patient who harrassed her with obscenities and threatening notes. When his blind mother visited him on occasion, Sister made a point of welcoming her. Romanelli was eventually expelled from the hospital for harrassing women who worked in the hospital laundry. He continued to harrass Sister Agostina, sending threats of "I will kill you with my own hands" and "Sister Agostina, you have only a month to live."

On November 13, 1894 Joseph Romanelli attacked Sister Agostina and killed her. As she was dying, she was heard only to utter words of forgiveness and invocations to Mary.