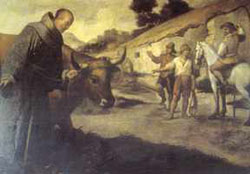 This saint was born at Montilla in Andalusia in 1549, did his studies in the school of the Jesuits, and in 1569, joined the Franciscan Observance at his birth place. He was duly professed and in 1576 ordained priest. Full of zeal and charity and an ardent desire for the salvation of souls, he divided his time between silent retirement and the ministry of preaching. Francis exercised his ministry in southern Spain for many years and heroically during the plague of 1583 at Granada, when he himself was struck down but made a quick recovery. After the epidemic was passed, Francis was selected to go with Father Balthazar Navarro to Peru. The missionaries to Panama, crossed the Isthmus, and again took ship on the other side. But approaching Peru, they ran into a bad storm and were driven aground on a sand bank. The ship looked as if she were going to pieces, and the master ordered that she be abandoned, leaving aboard her, a number of negro slaves for whom there was no room in the single lifeboat. Francis had these men under instruction and he now refused to leave them, so he remained behind on the ship, which was breaking up. He gathered them around him, encouraged them to trust in the mercy of God and the merits of Jesus Christ, and then baptized them. This he had scarcely done when the vessel parted amidships and some of the negroes were drowned. The remainder were on the part of the hull that was firmly aground and there they remained for three days, Francis keeping up their courage and rigging signals of distress. When the weather broke, the ship's boat returned and took them off to join the others in a place of safety, where they eventually were conveyed to Lima, Peru. Now began twenty years of untiring ministry among the Indians and Spanish colonists. It is said that St. Francis had the "gift of tongues", and for his miracles he was called the "wonder-worker of the New World"; in his funeral sermon Father Sabastiani, S.J., said that God had chosen him to be "the hope and edification of all Peru, the example and glory of Lima, the splendor of the Seraphic order". A habit of his, very reminiscent of his religious father and namesake, was to take a lute and sing to Our Lady before her altar. He died on July 14, 1610, while his brethren was singing the conventual Mass, at the moment of consecration, saying with his last breath, "Glory be to God". His whole life, says Alvarez de Paz, was a holy uninterrupted course of zealous action, yet at the same time, a continued prayer. St. Francis Solano was canonized in 1726. His feast day is July 13th.