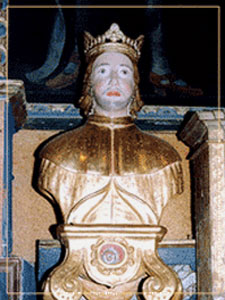 Elzear was of noble parents. He was born at the family castle at Ansouis, Province, France. He was educated at St. Victor's monastery in Marseilles by his uncle, who was abbot and was married to Delphina of Glandieves when both were sixteen. He inherited his father's estate, becoming lord of Ansouis and count of Ariano in the kingdom of Naples when he was twenty-three. He managed his estate with firmness, prudence, and ability and Elzear and Delphina were regarded as an ideal married couple, known for their holiness and piety. In 1317, they joined the court of King Robert of Naples, and Elzear became tutor to the King's son Charles. Elzear was named Justiciar of southern Abruzzi by Robert, acted as Robert's envoy to France to arrange the marriage of Mary of Valois and Charles, fell ill on the trip, and died in Paris on September 27th. Elzear was canonized in 1369 in a ceremony attended by Delphina. His feast day is September 27th.